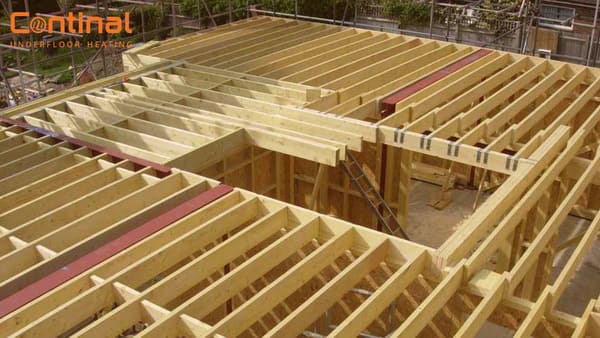 Fitting energy-efficient warm-water underfloor heating to joisted floors can sometimes be quite challenging. Myths abound about how hard it is; and with so many choices of system, it can be hard to sort the wheat from the chaff (and there's a lot of chaff...).
‍
The traditional ways can often involve significant changes in floor heights if not planned early enough. And of course, the myth still exists that you can’t carpet over a floor heating system.
‍
Renovation projects, unless extensive, rarely add water-based underfloor heating upstairs because of the perceived problems of fitting using traditional methods – and again, we hear the myth about carpets. Electric systems may be used under tiles in a bathroom or en-suite, but the high running costs of electric UFH become a significant issue; and of course people still like a towel rail.

The golden rules to consider

Plan early - The easiest way to ensure underfloor heating can be used on joisted floors is to plan the UFH fit right from the design stage. Talk to a reputable specialist company (such as Continal®) to find out the options available. Merchant staff rarely have up-to-date knowledge, and you could find you are either led away from UFH, or offered a system with inherent problems (such as inadequate heat output).

Build the UFH in early - Adding UFH to a joisted floor, when the timber deck has been laid and the ceilings are in place below, is always going to be a compromise. It can result in changes to finished floor heights, which then impacts on door openings, staircases, and finished floor levels. If you can build in the UFH at an early stage then your life will be easier, the system will be cheaper and less likely to be inadequate, and the following trades onsite will have less issues. 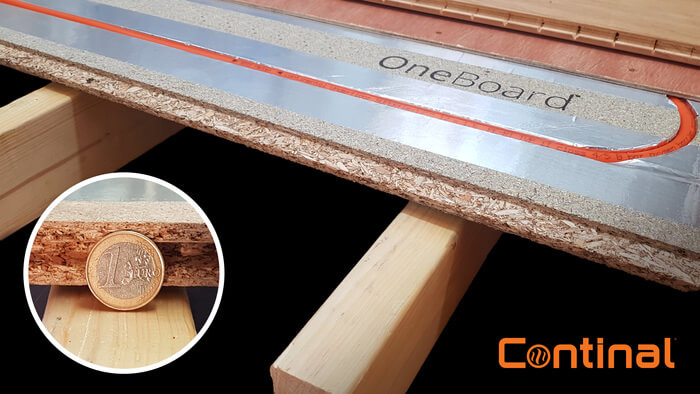 Don’t forget about insulation - We see so many electric systems just slapped down under tiles with no insulation, in the vain hope that some voodoo will be performed and the system will work.
‍
Sadly, we also see similar problems with some of the less-reputable UFH suppliers, who offer “thin” systems and somehow forget to advise that you need additional insulation below. In the case of joisted and wood deck floors, this often means you’ll need access from below to fit insulation between the joists: difficult and costly once the ceiling below is in place.

Consider finished floor levels - Carpet, wood and tiles are different thicknesses so floor levels vary between adjacent rooms. To gain an even finished floor level between adjacent rooms often means using levelling compounds, or adding layers of thin ply to make up the depth difference. This can be problematic if you’re working with traditional UFH systems.
‍
Careful design – and the correct UFH product selection – can help; but of course, that requires a UFH supplier with a wide product range and knowledgeable staff. Buying panels from a cheap internet site just isn’t going to work. Continal® has Europe’s largest range of UFH systems, and the Technical Sales Advisers are specifically trained in how to achieve an even final level between adjacent rooms with different floor finishes.

Yes, you can have carpet over warm-water UFH - This is a complete subject in itself, but carpet can easily be used on top of UFH. Again, using a specialist company with trained and experienced staff will help ensure the system works. Because the outputs are lower, the system needs careful design, and some fitting methods require a lot of additional work.
‍
The general rule of thumb is to avoid an underlay or carpet tog value in excess of 1.5; however, real life practice suggests 2 or 2.5 tog may actually be the limit if the system design is maximised. 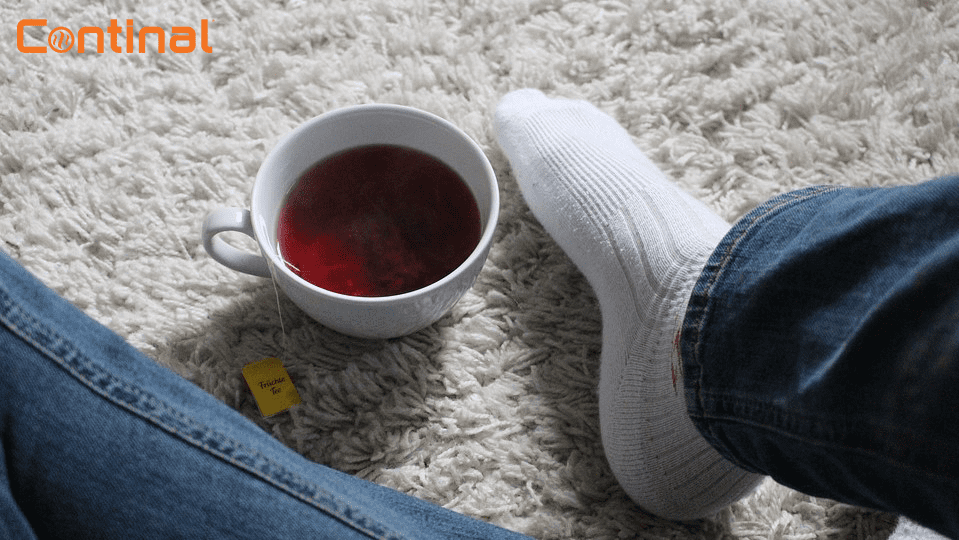 Work safely - One of the traditional ways to fit UFH to joisted floors has been to tack aluminium spreader plates between the joists then pipe it up, before laying the deck. This means you are balancing on joists as you work.
‍
Now of course most trades will walk over, or work across, an exposed joist floor. We’ve all done it, but the risk of slipping and falling is massively increased if you are spending days kneeling down, fighting a coil of grey or white plastic pipe which wants to spring back into its coil shape. (By the way, this is where a super-flexible pipe is essential: PEX [usually white] and Polybutylene [usually grey] go stiff at site temperatures.Solve this problem using SUPERflex™ by Continal®.)
‍
But why take the risk? There are systems that negate that risk entirely (like Continal’s OneBoard®), but still the old-style plates are still specified. Why? Because, well, “it’s what we’ve always done”.

Use tried and tested products - This seems like common sense, doesn’t it? Yet, we hear horror stories about “the latest whizz-bang new system that is going to revolutionise UFH and joists floors” that simply have not been tested properly, and have not been tried in thousands of installations.
‍
A few years back, there was a system that used a foiled bubble-wrap insulation draped over the joists, with pipes nailed or clipped to the joists. It was proven to not work well because the air gap around the pipe, and the lack of true insulation under them, simply couldn’t give the heat output without running at flow temperatures in excess of 70°C.

More recently, we have seen fragile polystyrene panels, with only 1mm of thickness under the pipe, sold as “simple to lay overfloor” systems. Of course they snap, and then you, the installer, has a real problem on your hands.

Joist floors and warm-water underfloor heating can work well together, but the traditional methods have inherent problems that need to be considered. There are lots of companies wanting to sell you what they have in their limited stock, which isn’t always the best solution, either for you or the homeowner.
‍
Systems such as our OneBoard®, SlimFix®, TileFix®, UltraSlim™, and ThermoDEK™, all offer advantages in particular situations.

In Part 2, we look at the whole range of possible solutions for joist floors, whether for new-build or renovation. Continue reading...

Author: Chris Ingram was the Chairman of the UK underfloor heating trade association for 8 years, and the founder (20 years ago) of what has become Continal® Group, best known in the UK as the trade specialist supplier Continental Underfloor®. Continal® design and supply across Europe, with Europe’s widest range of energy efficient underfloor heating systems. Chris continues to be Chairman of Continal®, and provides consultancy internationally to UFH suppliers, manufacturers, and suppliers.Chris has been responsible for some of the most ground-breaking developments in underfloor heating systems.

Get a UFH quote today